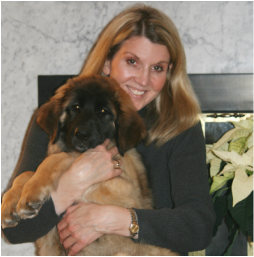 Hello and welcome to Orovale Leos!  My love affair with the Leonberger began in the late fall of 1998 when I saw one at the Royal Winter Fair in Toronto.  To say I was “smitten” would be an understatement.   My heart skipped a beat and it was love at first sight.   I knew I had to have one of these magnificent dogs.   So began my quest.

I read everything about the breed that I could get my hands on, and began contacting breeders across the country.   At that time, Leonbergers were not that well known, and it was not unusual to have to wait a year or more for a puppy.     One of the breeders we contacted was Gail Bishop.    The rest, they say, is history.   Two months later we welcomed 3 year old Lexi into our family.

Having had a Newfoundland dog during the early years of our marriage, my husband and I were no strangers to giant dogs.   We knew what to expect as far as that went.  What we didn't expect was how hard we would fall for this beautiful girl.

Lexi had a quiet dignity about her, and was the epitome of grace under pressure.  Her love and loyalty knew no bounds.  Of course, she also had a delightfully playful side and taught us how to laugh at ourselves.  In short, Lexi was the embodiment of everything a Leonberger should be.    Since that time we have had the pleasure of sharing our lives with more Leos.     With each, my appreciation of these majestic creatures continues to grow.

Given my love of the breed, I knew that I would eventually become involved in breeding, which is why I made a point of learning as much as I could over the years about pedigrees and structure, as well as canine nutrition and health issues specific to Leos.  In turn, I have incorporated these elements into my breeding program in an effort to help preserve and improve upon the breed.   My goal is to produce dogs that are structurally correct, with a sound temperament and good health.

The dogs in my breeding program show in conformation and either have, or are working toward, their Championship titles.     And because they are first and foremost important members of our family, a lot of time is also spent enjoying many fun activities and sports, as well as just generally “hanging out” together.